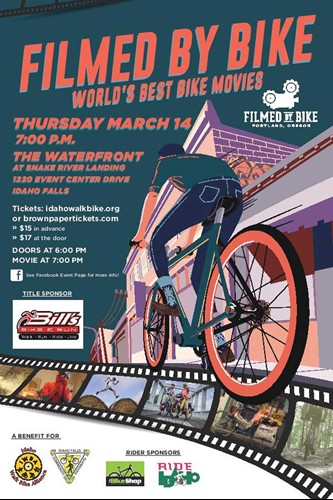 IDAHO FALLS – Riding bikes is one way people in eastern Idaho like to experience the outdoors.

Bike advocacy groups are teaming up Thursday night to host a bicycle-themed film festival to get you in the mood for the upcoming bike-riding season.

The nationally renowned film festival, entitled Filmed by Bike, has made its way from Portland, Oregon, to the Waterfront at Snake River Landing at 1220 Event Center Drive in Idaho Falls. The traveling festival features more than 15 of “the world’s best bike movies” from all over the world.

Bob Anthony, a spokesman for Idaho Walk Bike Alliance, tells EastIdahoNews.com the event will feature a wide variety of short films ranging from humorous movies about the benefits of biking to serious explorations of bike packing trails.

The Idaho Falls screening will be divided into two parts: Bike Love and Adventure Shorts.

In addition to the films, there will also be food vendors and raffle prizes, including a winter helmet, floor pump, pedals, and a single bike hitch rack for your car.

Idaho Falls Community Pathways and the Idaho Walk Bike Alliance is sponsoring the event. Proceeds from the film festival will go towards these organizations to help them advocate for bike paths, infrastructure, and safety throughout the state and in the community.

One bike project currently under construction in Idaho Falls is the Ryder Park Bike Trail south of the Sunnyside bridge. A group of volunteers began the three-phase project last summer with the construction of a beginner trail for kids. Trent Fell, the trail designer, says work on the project will pick up again next month, weather permitting.

“We didn’t get as far as we’d hoped last year,” Fell says. “Our main focus this year is to (finish phase one by) adding a couple of features to our kid trail, including ride bridges. We’ll also begin clearing the family fun trail next to the river.”

They’re hoping to have what’s left of phase one and all of phase two completed by the end of the summer before beginning work on phase three next summer. This is the most complex part of the project and the most costly. It includes a jump park, which will be built on a three-acre plot of land south of the trails.

Fell says they’ll have to hire some professionals to help them with this phase, which will cost somewhere between $30,000 and $40,000. It will take approximately two years to complete.

Regarding whether proceeds from the film festival will be used to fund the Ryder Park Bike Trail, Idaho Falls Community Pathways President Chris Staley says it is a “possibility,” but pathway projects tend to exceed the group’s budget.

“Those are big dollars we don’t have. Our small contribution wouldn’t amount to much,” Staley says. “There would have to be agreement among the board to get involved in the bike park.”

The organization is more focused on smaller projects, Staley says.

“For instance, we bought a bike work station (which we installed along the greenbelt). We also want to put a bike rack in the parking lot along Memorial Drive,” says Staley.

Donations from volunteers have supported the completion of the Ryder Park Bike Trail up to this point, Fell says. To complete phase three, they’ll have to host a fundraiser of their own or apply for a grant.

Meanwhile, the best way you can support the project is by getting involved and using the trails.

“You can ride the trails as they develop. After a build night, we make sure it’s completely rideable before we leave,” local rider Gray Augustus, who is involved in the trail’s construction, told us last summer.

Build nights will be held every Tuesday during the summer at 6 p.m. Anyone is welcome to get involved in building the trail during this time. Fell says they plan to have a build day on Saturdays as well. More information will be posted on the Ryder Bike Park Facebook page as it develops.

Whether you’re a bike enthusiast or not, Staley is encouraging you to attend the film festival and purchase your tickets in advance.

“It’s going to be a great time. Anyone who is interested in bikes at all will want to be there,” says Staley.

The cost is $15 to pre-order or $17 at the door. Tickets can be purchased at this link.

The Filmed by Bike Film Festival will kick off at 7 p.m. Doors open at 6 p.m.